The 2016 "Gamut" adds 2 trails: Royalty and First Deck! The 2016 route will be the same as 2015 *except* that on Stage 2 after climbing Buck riders turn left and then after rolling a little ways down Brushy Mt turn right down Royalty (instead of going back along the ridge and descending the Gauntlet a 2nd time) and then bear left onto First Deck. Then left onto Horsepen to Lakeside. These fantastic trail additions make the already amazing Gamut v2015 route even better! Enjoy!

**v2015 added Trail Running** Trail runners are welcome and encouraged to participate in The Gamut! :)

After the ride - The out-of-this-world-awesome Parkway Brewing Company​ is just a stone's throw from the start/finish of The Gamut, so when you've had your fill of riding on Sunday 7/10 head over Parkway! https://www.facebook.com/ParkwayBrewingCompany

How to Navigate with GPX Files
What is the Virginia Endurance Series? LINK

Roanoke is the "2013 Best Trail Town" http://www.blueridgeoutdoors.com/hiking/best-trail-town-2013-roanoke-virginia/ for one reason ... the singletrack at Carvin's Cove. 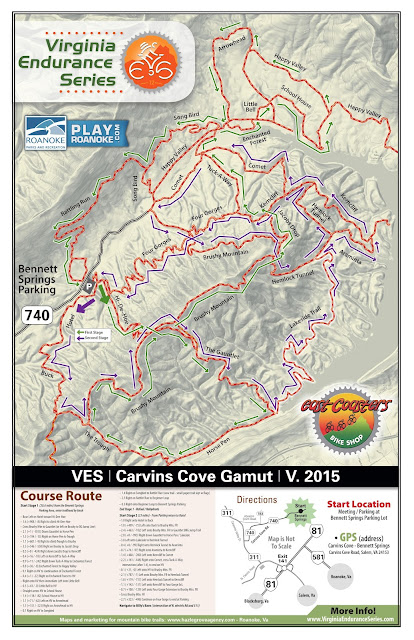 With the sweet trail offerings continuing to expand, riding "The Gamut" at Carvins Cove (every trail in the extensive singletrack system in a single day) has become quite a challenge: 43+ miles with LOTS of climbing.

The absolutely incredible trails, and the corresponding high most mountain bikers experience while riding them, keeps the accomplishment of riding "The Gamut" seemingly within reach (though very few have people have actually done it).

The Gamut consists of 2 stages (see above map). Both stages start and end at the Bennett Springs parking area, which is perfect for refueling and restocking mid-point in the Gamut attempt. Both stages contain numerous bail out options too.

On Sunday July 10th we will meet at the Bennett Springs Parking Area http://goo.gl/maps/6KASO for the 9am start of VES #8 an attempt at riding "The Gamut".

"The Gamut" Hall of Fame